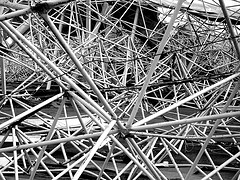 While you were busy updating your status on Facebook, social networks became a scientific discipline as well as an internet phenomenon… and the leading boffin in the field reckons that – contrary to popular belief – the internet is making us more insular, less diverse, and more prone to polarised ideological thinking.

Using the current election as a model, Krebs says that the internet does not bring people with different ideas together. Instead, people seek out groups with similar ideologies, which makes them less prone to objective, flexible thinking. And no matter how extreme the idea, there’s someone out there on the web who will build a forum around it.

Psychological research has shown that when people find their “political mirrors,” they immediately build clusters around their ideas. This is why politicians’ use of confrontational language like, “You’re either with us, or with the terrorists,” seems to work.

It’s not all negativity, though; Krebs believes that social networks can be useful tools once the “strong individuals or groups that can lead to group-thinking shifts” are identified… which should make the marketing types happy, if no one else. [image by dominik99]

But even so, this doesn’t exactly feel like news – my memories of school are a bit fuzzy, but I think I remember the social cliques working exactly the same way. Maybe what Krebs is observing is just an amplification of a long-standing human tendency?

One thought on “The dark side of social networks”