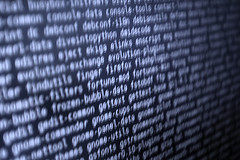 The possibility of a digital dark age has been noted before, but I hadn’t realised the problem was this acute, according to Prof Jerome P. McDonough at the University of Illinois:

“Even over the course of 10 years, you can have a rapid enough evolution in the ways people store digital information and the programs they use to access it that file formats can fall out of date,” McDonough said.

Magnetic tape, which stores most of the world’s computer backups, can degrade within a decade. According to the National Archives Web site by the mid-1970s, only two machines could read the data from the 1960 U.S. Census: One was in Japan, the other in the Smithsonian Institution. Some of the data collected from NASA’s 1976 Viking landing on Mars is unreadable and lost forever.

It is a pity – and it highlights the importance of non-proprietary file types.

I imagine extracting data from obsolete formats will become a major industry in the future.