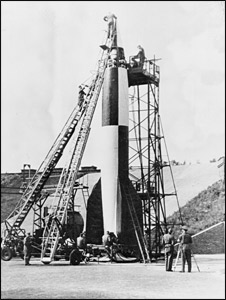 An interesting article on Kummersdorf in Germany, site of some of Wernher von Braun‘s rocket experiments before WWII:

It is here that the German military initiated the world’s first large-scale rocket development programme in the first half of the 20th Century.

This programme led to the development of the infamous V-2 rocket, used by Germany against the allies during World War II.

More information about the Kummersdorf proving grounds can be found here.

[article and image from the BBC]