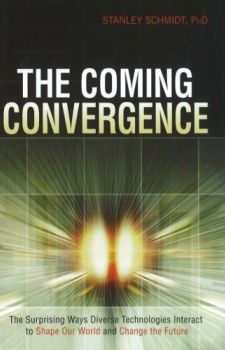 The Coming Convergence nestles at the better (i.e. not too sensational) end of the pop-science niche, and could easily be strap-lined as “a beginner’s guide to the singularity”. Schmidt’s degree in physics means he’s no stranger to the scientific method, but his twenty-five years as editor of Analog Science Fiction Magazine suggests he should have a pretty decent grasp of how to make science into a story that’s engaging to read. I don’t doubt he has; what I do doubt, with hindsight, is my suitability as a reviewer for this book.

My problem with The Coming Convergence is that – at the risk of sounding conceited – I know it all already, and I expect the vast majority of Futurismic‘s readership do too. We’ve heard of compound exponential change, we read daily reports on previously disparate technologies coming together to create something new and unexpected… it’s our daily bread, pretty much. And it’s also the central concept behind The Coming Convergence, which illustrates the idea with thoroughly-explained examples of colliding technological threads and a little sprinkle of sf-nal speculation.

In the interests of accessibility, Schmidt predominantly sticks to technologies that even the most non-geeky Boomer will have at least heard of, if not actually encountered, and he maps the developmental arcs of the past onto the near future to give a glimpse of what might be just around the corner. For instance, the first chapter draws a wiggly but cohesive line from the fabric loom to the internet, explaining all the links in the chain, and the new developments that arose at each point to enable that next step to be taken.

Some of the illustrative examples are less successful than others, though. Describing the events of September 11th 2001 as an unforeseen and catastrophic convergence of the technologies of commercial air travel and skyscrapers is a bit like describing a baseball bat breaking a car window as a convergence of the horseless carriage and sports science. Not in any way wishing to downplay the tragedy of the event in question, but September 11th was not a convergence of technologies as much as it was a crude and opportunist hack, and its use as an example initially struck me as a cheap shot at emotional engagement with the subject matter, even though I doubt it was meant as such.

But we should rest my gripes aside because, as already mentioned, The Coming Convergence is not aimed at people like me. And the people at whom it is aimed (or, at least, those I believe would most enjoy and benefit from it) will be given lucid and simple explanations of the last few hundred years of technological development – sufficient to allow them to start seeing the bigger picture that Schmidt is trying to sketch out.

Of course, the picture in question is hard to draw because it is inherently speculative, and it hinges on the notion that we just don’t know what will emerge next from the merging of technological streams. When I described it as “the beginner’s guide to the singularity”, I purposefully avoided capitalising the S-word, because Schmidt isn’t preaching the transhuman rapture (although it gets mentioned in passing as a possibility). The Coming Convergence maps the singularity as a cultural conceptual blindspot – that point just beyond our temporal noses at which we fail to be able to predict likely outcomes with any solid sense of certainty; although the former is arguably a literary metaphor for the latter, they are two very different things.

And the latter makes a lot of sense if you’re plugged into the flow of change, as Futurismic endeavours to accomplish for its readers (and its writers). The Coming Convergence charts that river for the person who’s still a bit intimidated by the rapidity of technological change, but who can see that things are changing faster, and who has developed a curiosity about whether that’s a good thing or not… not to mention whether it can be harnessed, slowed or stopped.

In that spirit, Schmidt makes like any good sf author and takes a warts-and-all look at the road ahead of us, very fairly balancing the potential paradises we could build with the extinction events we already threaten to trigger, and highlighting the difficult choices we will have to make in the near future – difficult because we make them blindly, groping forward in the dark in hope of finding the light switch and not treading on the cat. The Coming Convergence is a primer on accelerating technological change and its close relationship to existential risk, and I’d recommend buying a copy for the friend or family member who most often asks you why you still read science fiction despite the complete absence of jetpacks and flying cars from everyday life.