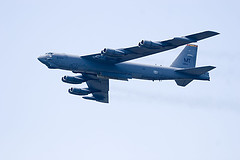 Following the crash of a chrome-dome B52 bomber near a Greenland air-base in 1963 one of the aircraft’s complement of four nuclear bombs could not be found amidst the wreckage:

…declassified documents obtained by the BBC under the US Freedom of Information Act, parts of which remain classified, reveal a much darker story, which has been confirmed by individuals involved in the clear-up and those who have had access to details since.

The documents make clear that within weeks of the incident, investigators piecing together the fragments realised that only three of the weapons could be accounted for.

As well as the fact they contained uranium and plutonium, the abandoned weapons parts were highly sensitive because of the way in which the design, shape and amount of uranium revealed classified elements of nuclear warhead design.

[story at the BBC, via Slashdot][image from TMWolf on flickr]