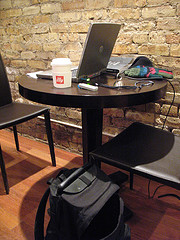 Via Charlie Stross, who isn’t entirely over the moon to see a trope from one of his novels coming true, we hear that the state of Vermont has passed a bill allowing the creation of limited liability corporations that are almost entirely virtual:

… up until now, U.S. law required LLCs to have physical headquarters, in-person board meetings and other regulations that have little relevance in the digital age.

No longer. Under the new law, for example, a board meeting may be conducted “in person or through the use of [an] electronic or telecommunications medium.” A ‘virtual company’ will be, as a legal matter, a Vermont limited liability company,” said Johnson. And other states are required to recognize the corporation as a legitimate LLC.

Interesting news. Hell knows that with the economic downturn, it’ll be a much more sensible idea to operate from coffee shops and build your swanky futuristic-looking headquarters in Second Life… even though the rent there isn’t as stable as its residents would like. [image by Zesmerelda]