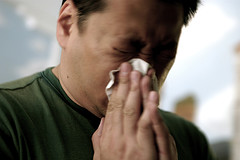 One thought on “Google search terms can predict flu outbreaks; what next?”