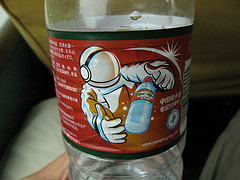 When you make that long trip to the planetary system of Fomalhaut, what are you going to drink? New York Times reporter and all-around brave person John Schwartz reports:

How does distilled urine and sweat taste? Not bad, actually…

Your intrepid reporter opened one of the bottles of “Purified Recycled Water” that Mr. [Robert] Bagdigian [leader of the project to recycle stuff on the International Space Station] brought with him. The wryly worded label was a little intimidating: “We use only the finest ingredients! Urine, Perspiration, Food Vapors, Bath Water, Simulated Animal Waste, and a touch of Iodine. No Carbs or Calories Added.”

With that as my verbal drum roll, I took a sip. Aside from a slight tang of iodine, it tasted like, well, water. I’ve had tap water that tasted much more like things I don’t want to think about.

The $250 million water recovery system is on its way to the station, “preparing our home in space for a larger international family,” as NASA’s spokesperson couches it. The system will recycle about 90 percent of the water used aboard the station and could pay for itself in a couple of years. Astronauts don’t seem worried; one of the first customers for the system, Sandra H. Magnus, says: “We drink recycled water every day, on a little bit longer time scale.”

[Apparently my water is OK for space by tom.glanz]

2 thoughts on “NASA gets serious about recycling water”