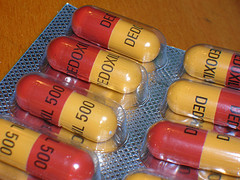 No report on a new wonder-drug would be complete without the statistical results of the clinical trials – you know, the bit where it says that people taking Wotdafuxocin were 60% less likely to find captioned cat pictures funny, or something similar. [image by rbrwr]

It will probably come as no surprise to our more cynical readers that these risk reduction numbers – while technically correct – are expressed in a way to maximise the medicine’s results as perceived by the casual reader:

Those are the figures on risk, expressed as something called the relative risk reduction. It is the biggest possible number for expressing the change in risk. But 54% lower than what? The trial was looking at whether it is worth taking a statin if you are at low risk of a heart attack or a stroke, as a preventive measure: it is a huge market – normal people – but these are people whose baseline risk is already very low.

If you express the same risks from the same trial as an absolute risk reduction, they look less exciting. On placebo, your risk of a heart attack in the trial was 0.37 events per 100 person years; if you were taking rosuvastatin it fell to 0.17. Woohoo.

Other research shows that even when faced with the same risk reduction expressed in two different ways, the majority of people will still pick the one where the number looks bigger. Don’t beat yourself up about it too much, though – it’s not just us patients who fall for the marketing tricks:

The same result has also been found in experiments looking at doctors’ prescribing decisions.

But try to think positive – it’s not often we get placed on an equal footing with our doctors, after all.

3 thoughts on “This post will make you 75% more likely to make the right decision on medicines!”