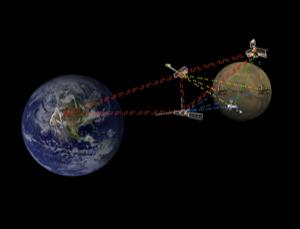 NASA finished first tests on a system that

could one day be used to automatically relay information between Earth, spacecraft, and astronauts, without the need for humans to schedule transmissions at each point. …

For the test, dozens of images of Mars and its moon Phobos were transmitted back and forth between computers on Earth and NASA’s Deep Impact spacecraft. The craft, which sent an impactor into Comet Tempel 1 in 2005, has been renamed “Epoxi” now that it its mission has been extended to search for extrasolar planets.

Further tests will begin on the International Space Station next year.

2 thoughts on “The Internet will go interplanetary”