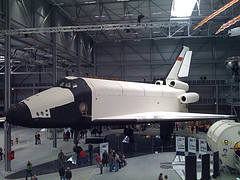 An interesting article on the Russian “Buran” space shuttle created in the last years of the Soviet Union:

On November 15, 1988, as snowy clouds and winds were swirling around Baikonur Cosmodrome in Kazakhstan, the Buran orbiter, attached to its giant Energia rocket, thundered into the gloomy early morning sky. Three hours and two orbits later, the 100-tonne bird glided back to a flawless landing just a few miles from its launch pad.

Despite the kind of strong winds that would rule out any launch or landing attempt by the US space shuttle, Buran touched down just 3m off the runway centreline.

And this planet-wide ballet was performed with its “pilots” safely on the ground.

One thought on “Buran space shuttle”