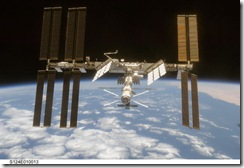 Break out the cake and light the candles, the International Space Station is 10 years old today (November 20). (Via Phys.org.)

The Russians launched the first part of the station from Kazakhstan on November 20, 1998; the second piece was carried up by the space shuttle two weeks later, and the first astronauts and cosmonauts arrived two years after that. Since then it has travelled 1.3 billion miles, orbited 57,300 times, and hosted 167 people from 15 different countries. Currently there are ten people aboard, and with the new additions and improvements, courtesy of the current Endeavour mission, the ISS will soon be able to host six people for long-term missions, up from the current three.

I feel a song coming on. Feel free to join in.

(Or, if you prefer, watch this video of STS-126 Commander Chris Ferguson and Expedition 18 Commander Mike Fincke marking the event in orbit.)