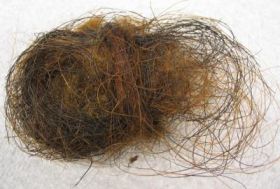 Scientists have successfully sequenced a reasonably complete genome from an extinct animal for the first time, in this case, a woolly mammoth:

By using hair, the scientists avoided problems that have bedeviled the sequencing of ancient DNA from bones because DNA from bacteria and fungi, which always are associated with ancient DNA, can more easily be removed from hair than from bones.

Another advantage of using hair is that less damage occurs to ancient DNA in hair because the hair shaft encases the remnant DNA like a biological plastic, thus protecting it from degradation and exposure to the elements.

One thought on “Mammoth progress”