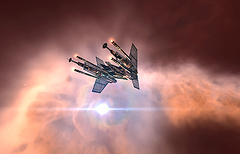 The space opera science fiction MMO game EVE Online was recently rocked by an insider-trading scandal. Unlike World of Warcraft, the EVE universe is singular and persistent: you can’t move your character to another server, so anything that happens effects everybody. [screenshot by Pentadact]

As such, it’s imperative that EVE‘s makers CCP maintain a strong and transparent bond of trust with their paying players, the latest development of which is the Council of Stellar Management – a peer-elected group of players who act as advisers to CCP on matters regarding gameplay. [via BoingBoing] How long before this (or another similar) monitoring system becomes big enough to harbour its own layers of corruption?

Still, at least CCP are making the effort to keep their userbase on side, unlike Linden Lab. The media glow on Second Life has been spasmodic since the initial burst of enthusiasm last year, but today’s big metaverse headline is about news agency Reuters pulling out of Second Life, with former stringer Eric Krangel launching a zinger of a parting shot from his new post at Silicon Alley Insider [via The Guardian]:

Abandon the idea that Second Life is a business app. I wasn’t in Second Life to play, I was there on assignment for Reuters. The login server would crash. I’d try to reach sources, but Second Life’s IM window would hang on “waiting” all day when trying to figure out who was online. “Teleports” … would stop working and I’d get locked out of my own office. These weren’t one-offs, they were my daily, first-hand, happens-all-the-time experiences. For all its bugs, Second Life is tolerable as a playground, but enterprise users will never and should never use it for business. Re-focus on the core mission: Keeping the hobbyists happy and converting potential recruits into hardcore (read: fees-paying) users.

Unfortunately, Linden Lab can’t even seem to keep its paying customers happy, as protests over recent price hikes have demonstrated. I doubt this spells the end of the line for the metaverse – or even for Second Life itself – but the brave new world doesn’t seem quite so brave or new any more.

One thought on “All change in the metaverse: EVE embraces democracy as Reuters turns tail on Second Life”