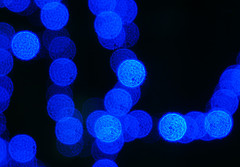 A new study suggests that the use and deployment of nanotechnology may be the new frontline in “culture war”, research from the Yale Law School and the Project on Emerging Nanotechnologies suggests:

Another study shows religion also plays a part, with citizens of more religious countries being less enthusiastic about nanotechnology than more secular countries:

They found that countries where religious belief was strong, such as Ireland and Italy, tended to be the least accepting of nanotechnology, whereas those where religion was less significant such as Belgium or the Netherlands were more accepting of the technology.

Professor Dietram Scheufele from the Department of Life Sciences Communication at the University of Wisconsin, who led the research, said religious belief exerted a strong influence on how people viewed nanotechnology.

[via Physorg, Boing Boing, the BBC, and Nature Nanotechnology here and here][image from timsnell on flickr]

One thought on “Nanotech culture war in prospect?”