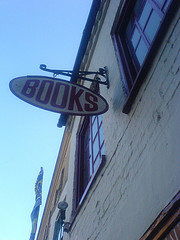 We already know there’s trouble in the world of publishing, and according to the New York Times there’s just as much grief in the domain of the bricks-and-mortar bookstores… and it’s all the fault of us dedicated readers who buy second-hand novels online or swap between circles of friends, not to mention students cutting costs by picking up pre-owned titles that would normally swell the backlist sales figures. Is publishing having its Napster moment? Is this the beginning of the end? [image by jayniebell]

Past studies have shown that an active second hand market helps to boost the sales of new goods, because it makes those goods more valuable to folks who recognize they’ll be able to resell them on the second hand market later. That may not be helpful to physical bookstore retailers, but those retailers have to learn to adjust with the times as well. Obviously, just selling books is going to make less and less sense, but we’ve seen retailers that have worked hard to turn their stores into destinations, where there were good reasons to go and buy stuff, rather than just being a physical version of what you could get online.

It’s an interesting response – though I’d point out that it’s exactly that type of “destination” branding that has killed off the UK library service so effectively. But then again, libraries aren’t businesses in the same way as bookstores.

Where do you buy your books?

6 thoughts on “2009 – the year the physical bookstore lays down and dies?”