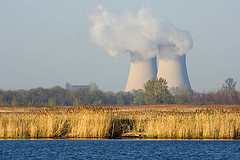 Reading about an interesting form of nuclear power here, concerning this upcoming book. The Integral Fast Reactor design uses liquid sodium instead of water as the coolant, is passively safe, and addresses many of the concerns about nuclear proliferation, efficiency, and (in part) the long-term storage problems that beset nuclear power. From this interesting FAQ on IFR by proponent George S Stanford:

[The reactors] use liquid sodium for cooling and heat transfer, which makes the system intrinsically safer than one that uses water. That is because the molten sodium runs at atmospheric pressure, which means that there is no internal pressure to cause the type of accident that has to be carefully designed against in an LWR: a massive pipe rupture followed by “blowdown” of the coolant.

There is a downside as well: sodium burns in air and reacts with water. As ever with nuclear technology, it seems there are downsides. However I (along with environmentalist George Monbiot) am getting the feeling that nuclear has to be part of the solution to the problems of anthropogenic climate change and peak oil.