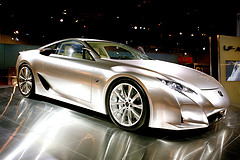 One thought on “Spam ubiquity – even your Lexus is no haven”