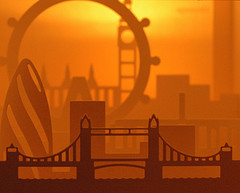 Here comes the latest iteration of the land-grab. Given that the metaverse offers theoretically infinite space in all four dimensions, no one need fight over lebensraum… but Victor Keegan points out the business value of having the definitive virtual version of a city like London:

Build a 3D London and you can rent out apartments and shops, get advertising, boost heritage sites and familiarise tourists with the capital before they arrive. And, of course, go out clubbing and meeting people.

During a recession, won’t people want to stay at home using broadband, already paid for, rather than going out? Won’t they want to shop without the hassle and parking problems of Oxford Street?

Keegan’s not the first to realise this – five different organisations are building or have already built a 3D version of the UK capital. The Second Life iteration of London is already up, running and renting out properties, but the proprietary versions (which will doubtless be bigger money-makers in the long run, and hopefully less frustratingly bug-ridden) are hot on its heels, including a yet-to-be-unveiled Microsoft offering that is apparently described by a rival as “phenomenal”. [image by *spud*]

What isn’t mentioned is what the City of London itself thinks about all this (although the Ordnance Survey people have already delayed one project by a few years by claiming exclusive rights on their maps, despite their bill being footed by the taxpayer). If there’s money to be made from a virtual London, I’m certain that the real London will feel it deserves a cut of the action; it’s no less ridiculous than a lot of current intellectual property lawsuits.

So, will the famous (and not-so-famous) cities of the world start selling exclusive licenses to metaverse developers? Will developers with less scruples build unlicensed replicas anyway? Will there be a panoply of Londons, Amsterdams, New Yorks or Belgrades – the X-rated versions, the Christianised or Islamicised versions, the simplified versions for school trips?

And once the bandwidth and bit-rates get high enough, will we ever want to trudge around the originals?

One thought on “The battle to build the definitive virtual London”