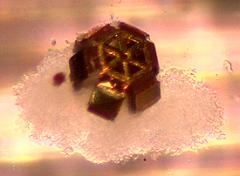 Scientists at John Hopkins University, Maryland have developed minute hands that can grasp tiny pieces of tissue when exposed to particular chemicals:

The researchers describe development of tiny metallic microgrippers shaped like a hand that work without electricity. The grippers are about 0.03 inches wide when open — smaller than the diameter of a grain of sand and made from a gold-coated nickel “palm” joined by six pointy metallic “fingers.”

The addition of certain chemicals triggers the hands to open or close. In laboratory studies, the scientists demonstrated that the grippers could grasp and release tiny pipes and glass beads and transport these objects to distant locations with the aid of a magnet, showcasing their potential for pick-and-place operations that are ubiquitous in manufacturing, they say.

…the untethered grippers devised by Gracias’ team contain gold-plated nickel, allowing them to be steered by magnets outside the body. “With this method, we were able to remotely move the microgrippers a relatively long distance over tissue without getting stuck, he said. “Additionally, the microgrippers are triggered to close and extricate cells from tissue when exposed to certain biochemicals or biologically relevant temperatures.”