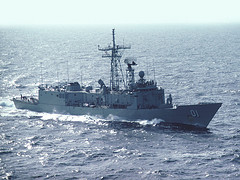 Remember when I mentioned that the UK’s Royal Navy has been installing a Windows derivative on its warship and submarine control computers? [image by Serendigity]

Well, it’s a different set of hardware, but apparently a bunch of RN computers have been knocked out of action my an email-borne virus in recent weeks. There’s got to be a great opening for an open-source contractor with a clean security history over there right now… [via SlashDot]

More seriously, though, this highlights a very real risk to ‘traditional’ military forces. After all, if small territorial conflicts like the Gaza situation can go worldwide on the web, that suggests that any opponent worth deploying your navy against is at least going to try futzing with your computer systems… and if the combination of your installed operating systems and a lack of basic email security savvy means you can have warship systems out of action for a few days, there’s some opportunities for a really nasty David and Goliath scenario somewhere down the line.