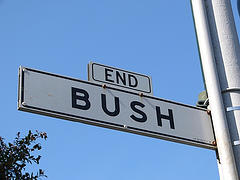 2 thoughts on “Peter Watts: the Bush presidency was the most successful ever”