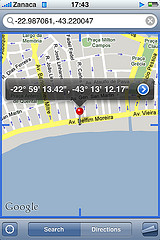 Over at Wired last week, they ran a piece by Matthew Honan about his experiences with the new wave of geolocational software for the iPhone and Google’s G1. He starts off by asking fellow users in his locality what they use the systems for:

My first response came from someone named Bridget, who, according to her profile, at least, was a 25 year-old woman with a proclivity for scarves. “To find sex, asshole,” she wrote.

“I’m sorry? You mean it’s for finding people to have sex with?” I zapped back.

“Send me a nude pic for my birthday,” she replied.

A friendly offer, but I demurred. Anonymous geoshagging is not what I had in mind when I imagined what the GPS revolution could mean to me.

Honan goes on to look at the pros and cons of what is admittedly still a technology in its applicational infancy, which he finds fun and intriguing at the same time that it seems creepy and intrusive – the latter response being one that I’d attribute to his age. When these apps have matured in a few years, however, the Facebook generation will have no qualms or fears about them whatsoever.

Whether they should have qualms is another question, of course. If nothing else, geolocational apps are a reminder that the tin-foil hat brigade’s warnings about The Feds being able to follow your cell phone weren’t entirely fictional; the potential for stalking someone is obvious.

But would stalking be as big a risk in a society where many people’s locations were public knowledge? If lifelogging catches on at the same time, we might all become one big happy globally geolocative panopticon…