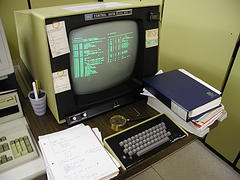 The head of the British Library has warned that, unless measures are taken sooner rather than later, we stand to lose vital parts of our cultural heritage to the rapid technological and social evolution of the internet. But why should we care about old websites being replaced by new ones, never to be seen again?

… Brindley cites two examples of losses overseas. When Barack Obama was inaugurated as US president last week, all traces of George Bush disappeared from the White House website, including a booklet entitled 100 Things Americans May Not Know About the Bush Administration, which is no longer accessible.

There were more than 150 websites relating to the 2000 Olympics in Sydney, she continues, but these, too, vanished instantly at the end of the games and are now stored only by the National Library of Australia. “If websites continue to disappear in the same way as those on President Bush and the Sydney Olympics – perhaps exacerbated by the current economic climate that is killing companies – the memory of the nation disappears too,” Brindley writes. “Historians of the future, citizens of the future, will find a black hole in the knowledge base of the 21st century.”

When you think about it like that, it makes a bit more sense. The National Archives are storing government emails, and encouraging us to store our own as well; the problem is that, contrary to popular belief, Google and their competitors do not store a copy of everything on the web.

The falling prices of storage media will help matters somewhat, but someone still has to make the effort to copy and file them all… still, at least a hard-drive full of old emails will take up less space than a few years’ worth of paper correspondence. [image by Nico Kaiser]

But here’s a thought – how much more editable is a digital history? After all, if you can store something as ones and zeroes, you can manipulate those ones and zeroes into a new pattern. The embarrassing photos of your twenty-something fashion disasters, those mawkish and desperate chatroom sessions and forum threads from your teens… all could be smoothed and tweaked into something more in keeping with how you’d like others to see you. A photoshopping of the past, if you will.

Makes you realise that a verifiable archive of governmental websites and communications might be something worth having after all, doesn’t it?