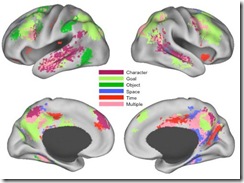 A new brain-imaging study shows what parts of the brain are active as we read a narrative, suggesting that as readers we create vivid mental situations of what is described and activate the part of the brain we would use to process similar experiences in real life. (Via PhysOrg.)

The research was conducted at the Dynamic Cognition Laboratory at Washington University in St. Louis, Missouri (and the paper, published in Psychological Science, is online here). (CORRECTION: That link leads to an older study published in the same journal by the same authors a couple of years ago. It’s related research, but not the newest study, which won’t be posted in public for another month or so. – EW.)

(UPDATE: Well, that was quick. A pre-print version of the current study is now online here. – EW)

Participants each read four stories, each less than 1,500 words, taken from a simple book from the 1940s about the daily activities of a young boy. They found:

…changes in the objects a character interacted with (e.g., “pulled a light cord”) were associated with increases in a region in the frontal lobes known to be important for controlling grasping motions. Changes in characters’ locations (e.g., “went through the front door into the kitchen”) were associated with increases in regions in the temporal lobes that are selectively activate when people view pictures of spatial scenes.

Overall, the data supported the view that readers construct mental simulations of events when reading stories.

Obviously, they need to repeat this story with people reading science fiction. What parts of the brain do we activate when we read descriptions of far-off planets, aliens, far-future technology and other confabulations for which we have no day to day experience to draw on?