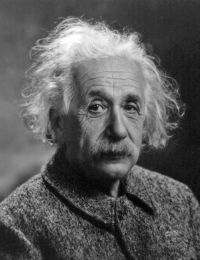 The more we learn about the nature of our own intelligence, the more our definitions of it change… but we’re still fairly fixated on the old-fashioned IQ test as a metric for judging how smart someone is. [Einstein portrait courtesy Wikimedia Commons]

George Dvorsky reports on the ideas of one Keith E. Stanovich, who recommends we expand the concept of intelligence to encompass more functions than just number-crunching, spatial logic and the more recent addition of ’emotional intelligence’:

Stanovich suggests that IQ tests should be adjusted to focus on valuable qualities and capacities that are highly relevant to our daily lives. He argues that IQ tests would be far more effective if they took into account not only mental “brightness” but also rationality — including such abilities as “judicious decision making, efficient behavioral regulation, sensible goal prioritization … [and] the proper calibration of evidence.”

4 thoughts on “Is dumping IQ a genius idea?”