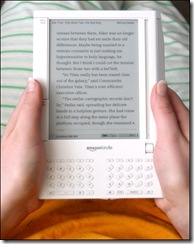 According to an analysis by Silicon Alley Insider, it actually costs the financially struggling New York Times Company about twice as much money to print and deliver the newspaper over a year as it would cost to send each of its subscribers a brand new Amazon Kindle instead. And an inside source tells them their estimate of the Times‘s printing costs is so low it’s “not even in the ballpark.” (Via Instapundit.)

Bottom line: “as a technology for delivering the news, newsprint isn’t just expensive and inefficient; it’s laughably so.”

No, papers can’t–yet–force everyone to read their content on some sort of hand-held device. But in the future, why not? Subscribe, and get a free ebook reader to which stories are uploaded regularly as they’re posted. Bonus: you can use the reader for other kinds of content, too. Which would also drive ebook sales. Win-win.

(And I say this as the former editor of a weekly newspaper, who once swore up and down that nothing would ever replace traditional print…a former newspaper editor, I might add, who now reads his local newspaper‘s digital edition exclusively.)