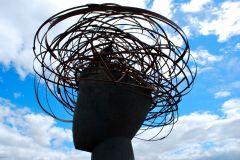 Transhumanist thinker Michael Anissimov has decided to attempt answering the question that almost everybody asks about the the idea of universal mind uploading – namely, why the hell would we want to do it?

His seven reasons include economic growth (topical), greater subjective well-being and environmental recovery, but the one that will probably surprise most of all is his suggestion that mind uploading would forge closer connections with other humans:

Our interactions with other people today is limited by the very low bandwidth of human speech and facial expressions. By offering partial readouts of our cognitive state to others, we could engage in a deeper exchange of ideas and emotions. I predict that “talking” as communication will become passé — we’ll engage in much deeper forms of informational and emotional exchange that will make the talking and facial expressions of today seem downright empty and soulless.

It all sounds a bit like a Greg Egan novel, doesn’t it? Personally, I’m first in the queue for upload (assuming it becomes possible within my lifetime), as I find corporeal existence to be massively distracting – I could get so much more done if I didn’t have this bag of meat to worry about… [image by Alex // Berlin]

4 thoughts on “Singularitarianism 101: What’s the point of uploading your mind?”