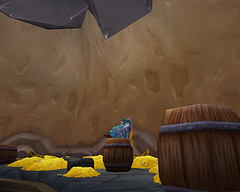 While meatspace endures lay-offs and plummeting valuations, it seems that there’s still plenty of life left in the virtual currencies business – an MMO gold-farming site has just been snapped up for US$10 million. [image by fernashes]

Gold-farming is an interesting business phenomenon for many reasons, not least of which is the fact that it deals in completely intangible goods. But it’s also out on the edge of legality when you consider the exploitative methods used to accrue the gold and items that are traded, and for most MMOs it’s against the rules to trade in in-world items beyond the game’s confines.

But it’s even more interesting to see the gold-farming market riding high while the real-world markets are tumbling, because it implies the two systems are connected but separate. Perhaps in the near-future people will be able to ride out the rough times by shifting their work into the virtual domains?

If we have any economists in the audience, I’d really welcome your input on this story; the interaction between real and virtual economies is as fascinating as it is baffling to me.