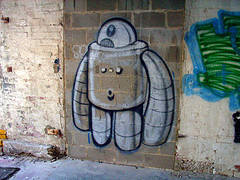 Researchers at the University of Aberdeen have developed a new method of designing complex robots using genetic algorithms:

The EA randomly creates large numbers of control “genomes” for the robot. These behaviour patterns are tested in training sessions, and the most successful genomes are “bred” together to create still better versions – until the best control system is arrived at.

MacLeod’s team took this idea a step further, however, and developed an incremental evolutionary algorithm (IEA) capable of adding new parts to its robot brain over time.

Further reading: an excellent non-fiction book that explores the idea of evolution as a general method of design is The Origin of Wealth by Eric Beinhocker.