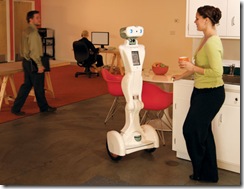 A few years ago I seem to recall a spate of SF stories in Asimov‘s and elsewhere that dealt with the concept of telepresence: humans controlling robots at a distance, immersed in a virtual-reality world that made what happened to the robot feel much more real than merely sitting at a control panel manipulating a joystick.

The robot’s 802.11g wireless connectivity allows 20 FPS video at 640×480 resolution captured by the QA’s two 5MP color cameras and full duplex, high fidelity sound to be sent back to the user’s Mac or PC running the client software. A 7-inch color LCD screen in the QA’s chest can display the remote user to give long distance interactions that human touch while navigation comes courtesy of QA’s onboard 5.5 yard range LIDAR (Light Detection and Ranging), which functions like RADAR but uses light instead of radio waves.

Standing at 5 foot tall the QA can also bend to 2 foot high to interact more easily with people sitting. The robot’s rechargeable Li-ion battery gives 4-6 hours of operation and allows QA to reach speeds of up to 6 MPH on his two 12-inch diameter wheels.

The company is developing other robots that walk, jump and run on two legs. One of them reportedly has a fully articulated hand that will permit the operator to perform a wide range of tasks. The QA is expected to be available for purchase later this year at around $30,000 U.S.

Maybe someday we’ll all sit at home at a computer and send out robots to do our jobs and errands, and never leave the house.

Someone should make a movie about it…