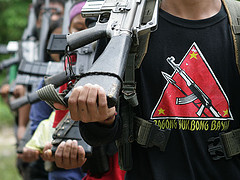 John Robb isn’t going to give you the news you want to hear. Nope, sorry – the Depression scenario has already emerged fully, and the results are not going to be pretty as we transition into a new politico-economical era in its wake:

A global depression, in and of itself, isn’t the end of the world. However, it can set in motion unexpected events (black swans) — as in how the last depression catalyzed WW2. The revisionist effort to this economic collapse isn’t likely to be a surge in ideology or nationalism. Instead, we can expect an organic realignment as small groups of people form new primary loyalties (either to violent manufactured tribes or resilient communities), slot themselves into open source movements, and challenge a wheezing group of incumbent nation-states. This is a global guerrilla century.

So, not exactly a rosy outlook… and a poke in the eye for the Positive Manifesto school of sf, perhaps. That said, there’s plenty of starting points in Robb’s material for the more dystopian-leaning writer to tackle! [image by Keith Bacongco]

But what do you think – is Robb looking at a worst-case scenario and seeing Mad Max re-runs, or is he being generous with the possibilities of civilisational collapse?

3 thoughts on “Screw optimism – this is a global guerilla century”