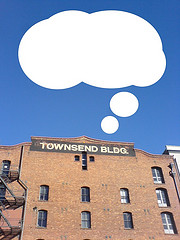 Researchers describe how it might one day be possible to simulate large parts of the human cortex on a computer, and how this could lead to functional human equivalent AI:

Software simulation of the human brain is just one half the solution. The other is to create a new chip design that will mimic the neuron and synaptic structure of the brain.

That’s where Kwabena Boahen, associate professor of bioengineering at Stanford University, hopes to help. Boahen, along with other Stanford professors, has been working on implementing neural architectures in silicon.

One of the main challenges to building this system in hardware, explains Boahen, is that each neuron connects to others through 8,000 synapses. It takes about 20 transistors to implement a synapse, so building the silicon equivalent of 220 trillion synapses is a tall order, indeed.

This is a different approach to more traditional AI research that has been going on for decades: instead of trying to write artificially intelligent computer programs using knowledge representation or commonsense knowledge representation now researchers are concentrating on reverse-engineering the only extant example of general intelligence we have.

One thought on “Reverse engineering the brain”