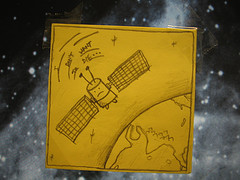 On Tuesday a satellite owned by the US company Iridium collided with an inoperative Russian satellite nearly 780 km above the Earth:

The risk to the International Space Station and a shuttle launch planned for later this month is said to be low.

The impact produced massive clouds of debris, and the magnitude of the crash is not expected to be clear for weeks.

There are thousands of man-made objects orbiting the earth, but this is thought to be the first time two intact spacecraft have hit each other, the BBC’s Andy Gallacher in Miami says.

Unfortunately as Earth orbit becomes more and more crowded (the number of orbiting objects larger than 10 cm reached 10, 000 in 2007 and is still increasing) it increases the risk of a cascade effect, where one collision results in a cloud of debris that go on to cause more collisions resulting in millions of tiny fragments resulting in a major and ongoing hazard to space exploration.

Given the risk of hindering future space exploration – is it worth pushing for an Earth orbit cleanup (and is such an idea even feasible)?

One thought on “US and Russian satellites collide”