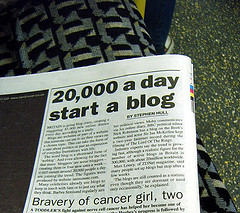 We’ve heard plenty of worrying from journalists about how the death of print newspapers will be the death of journalism itself, so here’s a contrary view from within the same camp. Jim Stovall of JPROF suggests that the medium of newspapers is actually part of the problem, and that journalism will be improved once it is no longer chained to the printing press.

He provides a number of reasons for optimism, of which I think this is the most telling:

More reporters. Students in my experience are wildly excited about this new age of journalism. I am honored to be the faculty adviser to the Tennessee Journalist, the student operated news web site of the School of Journalism and Electronic Media at the University of Tennessee. More than 35 people regularly show up at our weekly staff meeting (only the editors are required to come) and the numbers are growing. The number of our majors has grown from 350 to 450 in just one year.

What has caused this, I wonder? The tempting conclusion is that the ease of self-publication has made people less intimidated by the idea of producing writing in public, but maybe it’s also to do with the erosion of the media monoculture – the web has provided a space for dissenting voices and niche interests that newspapers couldn’t support, tied as they are to physical locations.

Whatever the cause, it’s good to see some optimism. Journalism was born out of the desire to learn and communicate, and it looks like that desire has been increased rather than eroded. Who knew? [via TechDirt; image by Annie Mole]