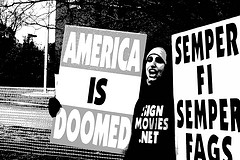 One of the perennial themes that news sources both online and offline never seem to tire of is “the internet is making us stupid”. According to science historian Robert Proctor, that’s only half correct; it’s not the internet itself that encourages ignorance, but the way it is used by groups with a single point of interest:

[Proctor] has developed a word inspired by this trend: agnotology. Derived from the Greek root agnosis, it is “the study of culturally constructed ignorance.”

As Proctor argues, when society doesn’t know something, it’s often because special interests work hard to create confusion. Anti-Obama groups likely spent millions insisting he’s a Muslim; church groups have shelled out even more pushing creationism. The oil and auto industries carefully seed doubt about the causes of global warming. And when the dust settles, society knows less than it did before.

“People always assume that if someone doesn’t know something, it’s because they haven’t paid attention or haven’t yet figured it out,” Proctor says. “But ignorance also comes from people literally suppressing truth—or drowning it out—or trying to make it so confusing that people stop caring about what’s true and what’s not.”

What is an observable certainty is that the web has become an ideological battle-ground, with dozens of little sects crusading around in defence of their own worldview, ever ready to smother dissent in a barrage of obfuscation.

What is less certain is how new this phenomenon actually is; it strikes me that the web just lets us do the same things we’ve always done, just faster and more anonymously. Somewhere in the distance, I hear the nitrous-oxide cackling of postmodern theorists… perhaps “things fall apart; the center cannot hold“. [via TechDirt; image by Logan Cyrus]