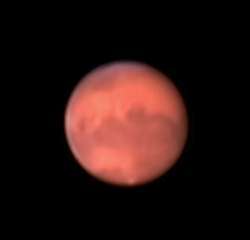 Finding life on Mars would be pretty awesome, right? Of course it would – but it would also mean we’d have to change the way we work on the red planet, because of the ethical can of worms presented by contaminating a whole new biosphere.

We’ve already contaminated it, though – all of our probes and landers are likely festooned with Earthside microbes. Now some planetary scientists recommend that, should life be found, we remove or destroy our Martian hardware and keep things pristine:

He warns that Earth life could be reawakened if weather conditions on the planet change. This could happen as a result of periodic swings in the planet’s tilt, or if humans purposely alter the Martian environment, which, ironically, they might do to make conditions cosier for any Martian life they might discover. Microbes on subsurface drills in search of liquid water could also contaminate potential Martian habitats.

If there’s no evidence of past or present life found… the question becomes more difficult. I always kind of sympathized with the Reds over the Greens in Kim Stanley Robinson’s Mars trilogy, but I also believe that establishing a human foothold off of Earth is a wise long-term survival strategy.

Could we justify changing the Martian climate, knowing that — as with Earth — such changes are irreversible?

The answer to that will depend on circumstance, I guess; it’s worth considering that the sort of political climate that would lead to greater exploration of Mars might well be the sort of climate that produces colonial attitudes. And the colonial era was pretty big on resource exploitation… [image by chipdatajeffb]

What do you think – should Mars be preserved pristine?

3 thoughts on “Should Mars be treated like a wildlife preserve?”