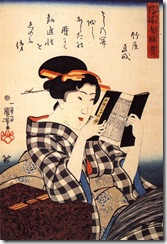 I mostly write novels in third person, although one of my YA novels (Andy Nebula: Interstellar Rock Star) was written in first. Now research has come along that examines how pronouns influence the way we imagine events being described in narratives (Via PhysOrg):

In these experiments, volunteers read sentences describing everyday actions. The statements were expressed in either first- (“I am…”), second- (“You are…”) or third-person (“He is…”). Volunteers then looked at pictures and had to indicate whether the images matched the sentences they had read. The pictures were presented in either an internal (i.e. as though the volunteer was performing the event him/herself) or external (i.e. as though the volunteer was observing the event) perspective.

The results, reported in Psychological Science, a journal of the Association for Psychological Science, indicate that we use different perspectives, depending on which pronouns are used. When the volunteers read statements that began, “You are…” they pictured the scene through their own eyes. However, when they read statements explicitly describing someone else (for example, sentences that began, “He is…”) then they tended to view the scene from an outsider’s perspective. Even more interesting was what the results revealed about first-person statements (sentences that began, “I am…”). The perspective used while imagining these actions depended on the amount of information provided – the volunteers who read only one first-person sentence viewed the scene from their point of view while the volunteers who read three first-person sentences saw the scene from an outsider’s perspective.

So if you really want someone to imagine they’re experiencing the events described in a story first-hand, you need to write in second person. Even with first-person fiction, your readers step outside your narrator’s point of view and imagine things as if they’re viewing it on TV.

Does this presage a vast upswelling of second-person fiction?

I hope not. ‘Cause the one thing the researchers haven’t explained is why second-person fiction is so intensely annoying. Plus it makes everything sound like a Choose Your Own Adventure book.

“You are reading a novel written entirely in second person. You try one paragraph, then a second. Then a third. You get fed up with the constant repetition of the word ‘you’. You swear at the author. You throw the book across the room…”

4 thoughts on “You are reading Futurismic. You find a post about how you imagine the events described in narratives…”