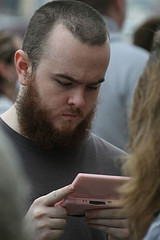 If you’re anything like me, you’ve probably never heard of Lady Greenfield, professor of synaptic pharmacology at Lincoln College, Oxford, and director of the Royal Institution. But Lady Greenfield knows all about you, and how your use of social networking sites and computer games is contributing to the ongoing infantilization of the 21st Century psyche:

Arguing that social network sites are putting attention span in jeopardy, she said: “If the young brain is exposed from the outset to a world of fast action and reaction, of instant new screen images flashing up with the press of a key, such rapid interchange might accustom the brain to operate over such timescales. Perhaps when in the real world such responses are not immediately forthcoming, we will see such behaviours and call them attention-deficit disorder.

“It might be helpful to investigate whether the near total submersion of our culture in screen technologies over the last decade might in some way be linked to the threefold increase over this period in prescriptions for methylphenidate, the drug prescribed for attention-deficit hyperactivity disorder.”

[Emphasis mine – try playing the same game with the whole of Lady Greenfield’s output, kids! Should keep your attention for twenty seconds at least.]

Will no one think of the children? God only knows that when a generation grows up with things that its elders didn’t have, the fate of the human race is bound to take a turn for the worse. Just look at the pernicious long-term effects of the printing press, the germ theory of medicine, radio and popular music, and (of course) television… [image by jmr_photo]

It’s unfortunate that we’re so hard-wired for fearing change – no new technology has managed to erase that little character trait yet, it seems. As always, the TechDirt boys do a great job of shredding this week’s sensationalist backlash against Twitter:

It’s pretty clear that none of these folks have ever really used Twitter — because they all seem to interpret it as being a broadcast mechanism, rather than a conversational one. This isn’t to say that Twitter is right for everyone, but most of the people who find value in it, find value in the conversational aspect of it, not that it “broadcasts” mundane facts of their lives. […] There are still plenty of people who hate Twitter, but it’s difficult to take seriously people complaining about it when it seems quite clear they’ve never even bothered to use it.

Quite – now, if you’ll excuse me, I’m going to post a few naked pictures of myself to Lady Greenfield’s MySpace page. LOLZ