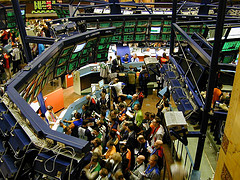 Look at the positive side: it may mean less time spent filling in those tedious personal psychological assessment forms.

But that’s about the only upside to the idea of replacing or supplementing the job interview with an MRI brain scan, so lets be thankful it’s only being mooted as a way of rooting lying psychopaths out of the financial sector:

While brain-scanning their volunteers, the Erasmus University researchers can identify exactly to which extent people react ’spontaneously’, i.e. subconsciously, to specific social interactions – such as financial trading on the stock market or shop personnel interacting with customers.

Thus they could also test job applicants for important posts such as bank directors and financial institutions to determine whether they are even suitable — or whether they have psychopathic tendencies which would exclude them from such jobs.

“In a brain scan one can see what people notice spontaneously, such as sales personnel interacting with customers,’ he said.

They have already discovered that people with slight autism, for instance, are totally unable to notice that customers may be responding negatively towards specific suggestions they make.

It’s a worrying thought; we could all end up neatly categorised by job suitability by the time we leave the education system, if not before – might as well start early, right?

But how do we know the people in charge of the testing aren’t psychopaths themselves? Then we might end up with our political and financial classes entirely top-loaded with amoral scumbags…

… oh, right. [via Spiraltwist at grinding.be; image by Petrick2008]