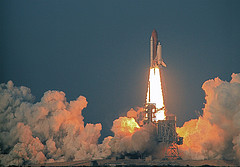 Well, at least one sector of the web is in a cheery mood at the moment – the space buffs are pretty stoked that President Obama’s budget includes a nice boost for NASA:

The budget calls on NASA to complete International Space Station construction, as well as continue its Earth science missions and aviation research. Yet it also remains fixed to former President George W. Bush’s plan to retire the space shuttle fleet by 2010 and replace them with the new Orion Crew Exploration Vehicle, which would fly astronauts to the space station and return them to the moon by 2020.

Good news for extropians and forward-thinkers, then – though it’s almost surprising to see a spending increase on something that, by definition, doesn’t garner immediate tangible results at home. Perhaps Obama”s  gang are thinking that this is the ideal time to sneak by a budget increase that might otherwise cause much angst and wailing; US$19billion may sound like a lot, but it’s a tiny fragment of that bailout package… [image by jurvetson]

One thought on “Obama budgets for moonshot”