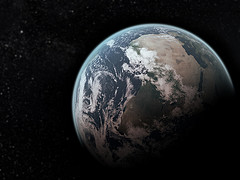 One of the better known responses to the Fermi Paradox is the Rare Earth hypothesis – the supposition that our planet is rare or unique in its ability to harbour life, and that hence we are unlikely to encounter life-forms elsewhere beyond our own biosphere. [image by Aaron Escobar]

Well, George Dvorsky isn’t having any of it.

I’ve always thought, however, that given cosmologically large numbers that this sort of thinking is symptomatic of our small minds and limited imaginations. It’s easy for us to throw up our hands and sheepishly declare that we’re somehow special. Such a conclusion, however, needs to be qualified against the data involved, and by the mounting evidence in support of the notion that ours appears to be a life-friendly universe.

Dvorsky goes on to attack the assumptions of Rare Earthers methodically.

It’s a myth, for example, that it took life a long time to get going on Earth. In reality it was quite the oppoite. Our planet formed over 4.6 billion years ago and rocks began to appear many millions of years later. Life emerged relatively quickly thereafter some 600 million years after the formation of rocks. It’s almost as if life couldn’t wait to get going once the conditions were right.

This isn’t to say that Dvorsky thinks that we’re being visited by little green men on a regular basis, though; he has a more worrying idea about why we’ve not heard from our neighbours yet.

My feeling is that the Rare Earth hypothesis is a passing scientific fad. There’s simply too much evidence growing against it.

In fact, the only thing going for it is the Fermi Paradox. It’s comforting to think that the Great Silence can be answered by the claim that we’re exceptionally special. Rare Earth steers us away from other, more disturbing solutions –namely the Great Filter hypothesis.

Of course, only evidence of alien civilisation will ever answer Fermi’s famous question; it’s always struck me as a kind of science fictional restatement of the argument for the existence of god. Maybe that’s why it’s such a fascinating subject for debate? A bit of teleology never fails to get people thinking…

One thought on “You think the Earth is rare? I got a dozen just like it out back…”