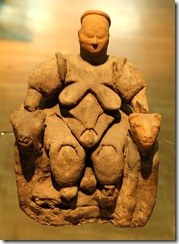 In science fiction, there has long been an assumption (not present in all stories, but certainly present in many) that in the future religion will have been consigned to the dustbin of history; that it simply cannot continue to withstand the onslaught of scientific evidence against the existence of a deity.

Demographically, however, it is the believers who have the edge, at least in the U.S. Drawing on data from the General Social Survey, “widely regarded as the single best source of data on societal trends,” blogger The Audacious Epigone notes that believers out-breed non-believers (Via FuturePundit):

From GSS data, I looked at the reported ideal family size* and the actual number of children had, by theistic confidence, among those who had essentially completed their total fertility (age 40-100):

He also finds among younger people, between the ages of 18-30, the number of children desired is also higher among those who “Know God exists” than any of the other categories, and says:

It is not that secular people cannot keep up with religious folks. They simply do not want to. In the numbers game, though, the results are what matter. The question regarding Steve Sailer’s suggestion that the future may belong to groups who are able to procreate the most is whether or not secularizing social trends are able to overcompensate for greater fertility among the religious.

Does the future, then, belong to believers, or will secular society suck the religion out of their children’s souls before they themselves grow old enough to breed? And how would/should this demographic data impact the fictional futures of SF writers?

4 thoughts on “Are religious skeptics bound for demographic doom?”