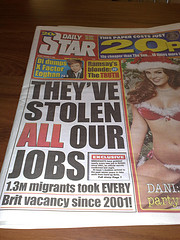 We try our best here at Futurismic to look beyond the sensational aspects of the news and dig into the real implications. Over at his place, Charlie Stross dissects the latest alcohol and cancer risk stories as covered in the mainstream media, and points out why it’s important to do so:

Alas, the Journal of the National Cancer Institute keeps the actual text behind a paywall; which makes it hard for me to check this takedown by Junkfood Science. However, I feel the need to quote two chunks of that post (which you really ought to read):

In other words, women drinking as many as two drinks a day were associated with lower actual incidences of all cancers compared with the nondrinkers.

In other words, the abstract of the paper was radically at odds with the substance of the study’s findings.

In other words, good news doesn’t sell newspapers… nor say what certain groups may want us to hear.

One can’t help but wonder how much of this is to do with the way the state funds scientific research; Ceaser hears what is pleasing unto Ceaser, AMIRITE? I’m guessing a lab or body that consistently finds results opposite to the ones desired isn’t going to get so many gigs offered to it further down the line… which isn’t to accuse scientists of lying so much as to accuse the bureaucracy that surrounds science of making concessions to external forces. [image by secretlondon123]

But then I wonder if I’m slipping into the conspiracist paranoia of my youth again. Who can we trust to tell us truth? Does the new multiplicity of news sources with different ideological filters make this problem smaller or larger?

2 thoughts on “Hype and headlines: looking beyond the abstract”