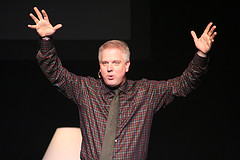 Our research suggests that the media is not treating these issues with the seriousness that scientists would say they deserve. The research company lpsos-MORI found that 50% of people think the jury is still out on the causes of global warming. The limited amount of media coverage – which tends to be restricted to the broadsheets – means that this statistic is unlikely to alter in the short-term.

Bit of a rant: Isn’t “climate change” just a weasel term for global warming? And, regrettable thouhg it is to see newspapers dying, could it be that one reason is that they’re not doing a very good job?

[Image: Fox News host Glenn Beck in 2007 (his low-rated show was on CNN then) by The Rocketeer]