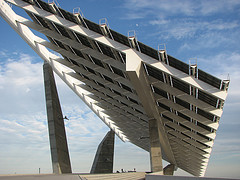 Depending on who you ask, solar power is somewhere between the ultimate clean solution to our energy addiction or a blind alley of inefficiency and cost that distracts us from more reasonable solutions. Recent developments have added a little weight to the former argument, with a solar panel manufacturer claiming a $1-per-Watt grid parity on manufacturing costs:

Using cadmium telluride (CdTe) technology in its thin-film photovoltaic cells, First Solar claims to have the lowest manufacturing cost per watt in the industry with the ability to make solar cells at 98 cents per watt, one third of the price of comparable standard silicon panels. The efficiency is in part due to a low cycle time – 2.5 hours from sheet of glass to solar module – about a tenth of the time it takes for silicon equivalents.

Cost is only part of the battle, of course, but dropping prices can’t harm solar’s status as a contender in the renewables marketplace. [image by laurenatclemson]

However, somebody somewhere is probably going to find some other reason for not deploying it – look at the NIMBYism that has plagued windfarms.