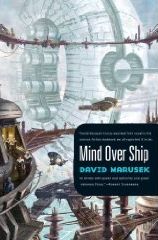 3 thoughts on “David Marusek on posthumanism and a soft singularity”