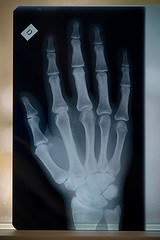 While 3D printing may be used predominantly for rapid prototyping of consumer goods (with all the potential risks that entails), it may turn out to have more humanitarian deployments as well. Proving a concept we mentioned a while back, a team of Swiss doctors have used a 3D printer to build replacement bones for a man’s thumb:

Weinand loaded the printer with tricalcium phosphate and a type of polylactic acid – natural structural materials found in the human body. The resulting bone “scaffolds” contained thousands of tiny pores into which bone cells could settle, grow and eventually displace the biodegradable scaffold altogether.

The bones still have to be ‘grown’ around the scaffold (using a surrogate mutant mouse, much like the famous Vacanti ear experiment), so it’s not a completely non-biological process. But it’s a step closer to a world where we can buy spare parts for our meat-machines ‘off the shelf’. [image by ansik]