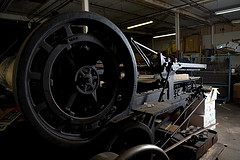 You know what they say about rats leaving sinking ships… but then again, you know what they say about rats being survivors. The sinking ship of newspapers is seeing a few of her passengers make a beeline for the portholes; now The Guardian has followed the lead of the New York Times and is opening itself up to the web with APIs rather than shutting the doors. [image by Baltimore City Paper, ironically enough]

As TechDirt points out, many Guardian staff are quite keen for competitors like the NYT to (as they keep threatening) start charging for access to content – because it would hand Teh Grauniad a naked advantage for no effort on their part.

That said, the NYT isn’t sitting on its hands:

“Paper is dying, but it’s just a device,” Bilton told Wired.com […] “Replacing it with pixels is a better experience.”

Bilton, a youthful technologist who programs mashups in his free time, is charged with inventing the future for the Gray Lady in an era of troubled times for newspapers. Fewer people are subscribing, classified ads are decamping for the internet and online revenues aren’t making up for lost print ads.

But Bilton envisions a world where news is freed from the confines of newsprint and becomes better.

It’s whether the shareholders and board of directors agree with him that counts, of course.

Also via TechDirt we see that Slate are using crowdsourced reportage (in this case photojournalism of Depression2.0, or whatever you prefer to call it) to lower costs and improve audience engagement at the same time. Contrary to the teeth-gnashing of industry pundits, newspapers aren’t going to die… but it’s clear the herd is going to be culled pretty seriously as it passes through the needle’s eye of technological and sociological pressure.

Unsurprisingly, younger members of the newpaper business believe that newspapers could save themselves by learning from the Silicon Valley approach – by embracing technology, change and way-out ideas rather than suppressing or ignoring them. They’d better move quickly, though.