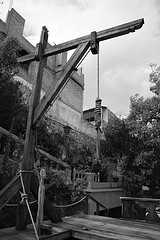 New Scientist ponders whether the arrival of true democracy will put executioners out of business in Asia:

The biggest obstacle to ending executions in Asia is politics, not culture. Often, the trigger for a decline in capital punishment is a degree of democracy and an easing of authoritarianism.

… this suggests that the main explanation for high execution rates in certain Asian countries is the authoritarian politics of their leaders. As the region continues to develop and become more democratic, we expect the executioner to become a vanishing species.

That, of course, presumes that the move toward more democratic government is universal and irreversible; that’s not a bet I’d be keen to make until I’ve watched the economic events of the next decade or so, personally.

Capital punishment may be on the decline overall (at least officially), but over in Europe the Czech Republic has caught the attention of other countries with its policy that allows judges to sentence certain types of sex offender to chemical castration. The Council of Europe defines it as a form of torture, but other lawmakers aren’t so keen to exclude it from the statute list permanently:

The Czech Republic has allowed at least 94 prisoners over the past decade to be surgically castrated. It is the only country in Europe that uses the procedure for sex offenders. Czech psychiatrists supervising the treatment — a one-hour operation that involves removal of the tissue that produces testosterone — insist that it is the most foolproof way to tame sexual urges in dangerous predators suffering from extreme sexual disorders.

Now, more countries in Europe are considering requiring or allowing chemical castration for violent sex offenders. There is intense debate over whose rights take precedence: those of sex offenders, who could be subjected to a punishment that many consider cruel, or those of society, which expects protection from sexual predators.

Punishments of all types raise questions of societal ethics, and with a subject as sensitive as sexual crimes it’s inevitable that opinions are going to be sharply divided. At the risk of channeling Focault for a moment, though, I’d point out that there’s a connection between executions in the Far East and chemical castrations in central Europe – they’re both ways of appealing to (and manipulating) mob sentiment. Given the threat of global political instability in the near future, I suspect we’ll be seeing more physical punishments on statute books, not less. [latter story via MetaFilter; image by Scott Clarke]

At what point does a mutilation become a just punishment? Is chemical castration going to be more effective at preventing sex offences, or making it look as if something is being done about sex offences?

2 thoughts on “Democracy and punishment – Asian executions and Czech castrations”